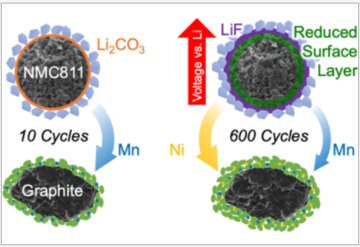 Erik Bjorklund and Professor Rob Weatherup worked with collaborators from The Faraday Institution, Diamond Light Source and the University of Cambridge to combine electrochemical analysis with surface -sensitive mechanisms X-ray photoelectron and absorption spectroscopies to observe the interfacial degradation occurring in LiNi0.8Mn0.1C00.1O2-graphite full cells.  They were combined over hundreds of cycles between fixed cell voltages (2.5-4.2 V).

They observed that capacity losses during the first ~200 cycles were primarily attributable to a loss of active lithium through electrolyte reduction on the graphite anode, seen as thickening the solid-electrolyte interphase (SEI).

The cathode was able to reach ever-higher potentials at the end of the charge.  A regime was entered after further cycling, where losses in accessible NM capacity began to limit cycle life.  This was accompanied by accelerated transition-metal reduction at the NMC surface, thickening of the cathode electrolyte interphase, decomposition of residual lithium carbonate, and increased cell impedance.

The team also detected transition-metal dissolution through increased incorporation into, and thickening of, the SEI, with Mn found to be initially most prevalent, with the proportion of Ni increasing with cycling.

The team commented in their paper 'Cycle-induced interfacial degradation and transition-metal cross-over in LiNi0.8Mn0.1C00.1O2-graphite cells' published in Chemistry Materials, that observed evolution of anode and cathode surface layers improves our understanding of the interconnected nature of the degradation occurring at each electrode and the impact on capacity retention, informing efforts to achieve a long cycle lifetime in Ni-rich NMCs.