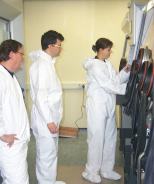 The High Temperature Superconductor Group in the Materials Department has since 1987 been active in the synthesis and fabrication of HTS materials in practically applicable forms. The group, currently led by Dr Chris Grovenor, has strong links with the HTS Communications Group in the Department of Engineering Science led by Professor David Edwards, and collaborates closely with research groups in Japan, Korea, India and Slovakia.

There are four major projects in the HTS group: